SANTA CLARA, Calif., June 7, 2021 /PRNewswire/ -- Marvell (NASDAQ: MRVL) today introduced the industry's first 1.6T Ethernet PHY with 100G PAM4 electrical input/outputs (I/Os) in 5nm. The demand for increased bandwidth in the data center to support massive data growth is driving the transition to 1.6T (Terabits per second) in the Ethernet backbone. 100G serial I/Os play a critical role in the cloud infrastructure to help move data across compute, networking and storage in a power-efficient manner. The new Marvell® Alaska® C PHY is designed to accelerate the transition to 100G serial interconnects and doubles the bandwidth speeds of the previous generation of PHYs to bring scalability for performance-critical cloud workloads and applications such as artificial intelligence and machine learning.

"100G serial electrical signaling is vitally important because it serves as the foundational speed for the next generation of high-speed networks," said Alan Weckel, founder and technology analyst of 650 Group. "Challenges in signal integrity typically arise as I/O speeds increase. As the industry transitions to 100G serial electrical signaling on high density switches and optics, Marvell's 1.6T PHY is the only solution that's available in the market today to support this transition."

With the introduction of the new PHY, Marvell is further extending its leadership in the high-speed Retimer and Gearbox segment with a broad portfolio spanning speeds from 10GbE to 800GbE and support for MACsec encryption and Class C compliant IEEE1588 PTP timestamping. With support for Ethernet speeds up to 800GbE, the new 88X93160 enables customers to build systems that comply with the latest IEEE and Ethernet Technology Consortium standards.

The Marvell 1.6T PHY incorporates the company's 112G 5nm SerDes solution that was announced in November of last year, offering breakthrough performance with the ability to operate at 112G PAM4 across channels with >40dB insertion loss. This 112G 5nm SerDes technology will be designed in Marvell's industry-proven Prestera® switch portfolio across data center, enterprise and carrier segments. It has also been adopted for use by multiple customers of Marvell's 5nm ASIC offering in high-performance infrastructure applications across a variety of markets.

About Marvell
To deliver the data infrastructure technology that connects the world, we're building solutions on the most powerful foundation: our partnerships with our customers. Trusted by the world's leading technology companies for 25 years, we move, store, process and secure the world's data with semiconductor solutions designed for our customers' current needs and future ambitions. Through a process of deep collaboration and transparency, we're ultimately changing the way tomorrow's enterprise, cloud, automotive, and carrier architectures transform—for the better.

Marvell and the M logo are trademarks of Marvell or its affiliates. Please visit www.marvell.com for a complete list of Marvell trademarks. Other names and brands may be claimed as the property of others. 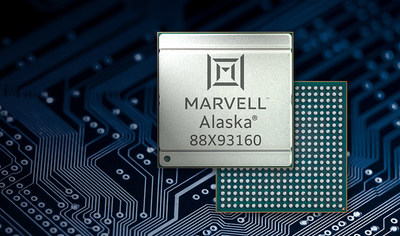