"Our strong performance in the third quarter is a direct result of growth in our core businesses and improved execution across the company, enabling us to continue to unlock the earnings power of Marvell," said Matt Murphy, Marvell President and CEO.

On November 20, 2017, Marvell Technology Group Ltd. announced a definitive agreement to acquire all outstanding shares of the common stock of Cavium, Inc. The transaction is expected to close in mid-calendar 2018, subject to regulatory approval as well as other customary closing conditions, including the adoption by Cavium shareholders of the merger agreement and the approval by Marvell shareholders of the issuance of Marvell common shares in the transaction.  For further information visit http://MarvellCavium.transactionannouncement.com.

Marvell will conduct a conference call on Tuesday, November 28, 2017 at 1:45 p.m. Pacific Time to discuss results for the third quarter of fiscal 2018. Interested parties may join the conference call by dialing 1-844-647-5488 or 1-615-247-0258, pass-code 4999449. The call will be webcast by Thomson Reuters and can be accessed at the Marvell Investor Relations website at http://investor.marvell.com/ with a replay available following the call until Wednesday, December 6, 2017.

Non-GAAP financial measures exclude the effect of share-based compensation expense, amortization and write-off of acquired intangible assets, acquisition-related costs, restructuring and other related charges, litigation settlement, and certain expenses and benefits that are driven primarily by discrete events that management does not consider to be directly related to Marvell's core business.

Non-GAAP diluted net income per share from continuing operations is calculated by dividing non-GAAP net income from continuing operations by non-GAAP weighted average shares outstanding (diluted). For purposes of calculating non-GAAP diluted net income per share, the GAAP weighted average shares outstanding (diluted) is adjusted to exclude the potential benefits of share-based compensation expected to be incurred in future periods but not yet recognized in the financial statements. The expected compensation costs are treated as additional proceeds assumed to be used to repurchase shares under the GAAP treasury stock method.

Non-GAAP financial measures have limitations in that they do not reflect all of the costs associated with the operations of Marvell's business as determined in accordance with GAAP. As a result, you should not consider these measures in isolation or as a substitute for analysis of Marvell's results as reported under GAAP. Marvell expects to continue to incur expenses similar to the non-GAAP adjustments described above, and exclusion of these items from Marvell's non-GAAP net income should not be construed as an inference that these costs are unusual, infrequent or non-recurring.

This press release contains forward-looking statements within the meaning of the federal securities laws that involve risks and uncertainties, including: the transaction between Marvell and Cavium, including statements regarding the anticipated timing of the transaction; Marvell's expectations regarding its fourth quarter of fiscal 2018 financial outlook; and Marvell's use of non-GAAP financial measures as important supplemental information. Words such as "anticipates," "expects," "intends," "plans," "projects," "believes," "seeks," "estimates," "can," "may," "will," "would" and similar expressions identify such forward-looking statements. These statements are not guarantees of results and should not be considered as an indication of future activity or future performance. Actual events or results may differ materially from those described in this press release due to a number of risks and uncertainties, including, but not limited to: the risk that the Cavium transaction may not be completed in a timely manner or at all, which may adversely affect Cavium's business and the price of its common stock and/or Marvell's business and the price of its common shares; the failure to satisfy the conditions to the consummation of the transaction, including the adoption of the merger agreement by the stockholders of Cavium, the approval of the issuance of Marvell shares in the transaction by the shareholders of Marvell, and the receipt of certain governmental and regulatory approvals; the failure of Marvell to obtain the necessary financing pursuant to the arrangements set forth in the debt commitment letters delivered pursuant to the merger agreement or otherwise; the occurrence of any event, change or other circumstance that could give rise to the termination of the merger agreement; the effect of the announcement or pendency of the transaction on Cavium's business relationships, operating results, and business generally; risks that the proposed transaction disrupts current plans and operations of Cavium or Marvell and potential difficulties in Cavium employee retention as a result of the transaction; risks related to diverting management's attention from Cavium's ongoing business operations; the outcome of any legal proceedings that may be instituted against Marvell or against Cavium related to the merger agreement or the transaction; the ability of Marvell to successfully integrate Cavium's operations and product lines; the ability of Marvell to implement its plans, forecasts, and other expectations with respect to Cavium's business after the completion of the proposed merger and realize the anticipated synergies and cost savings in the time frame anticipated or at all, and identify and realize additional opportunities; the risk of downturns in the highly cyclical semiconductor industry; Marvell's dependence upon the storage, networking and connectivity markets, which are highly cyclical and intensely competitive; the outcome of pending or future litigation and legal and regulatory proceedings; Marvell's dependence on a small number of customers; severe financial hardship or bankruptcy of one or more of Marvell's major customers; Marvell's ability and the ability of its customers to successfully compete in the markets in which it serves; Marvell's reliance on independent foundries and subcontractors for the manufacture, assembly and testing of its products; Marvell's ability and its customers' ability to develop new and enhanced products and the adoption of those products in the market; decreases in gross margin and results of operations in the future due to a number of factors; Marvell's ability to estimate customer demand and future sales accurately; Marvell's ability to scale its operations in response to changes in demand for existing or new products and services; the impact of international conflict and continued economic volatility in either domestic or foreign markets; the effects of transitioning to smaller geometry process technologies; the risks associated with manufacturing and selling a majority of products and customers' products outside of the United States; risks associated with acquisition and consolidation activity in the semiconductor industry; the impact of any change in the income tax laws in jurisdictions where Marvell operates and the loss of any beneficial tax treatment that Marvell currently enjoys; the effects of any potential acquisitions or investments; Marvell's ability to protect its intellectual property; the impact and costs associated with changes in international financial and regulatory conditions; Marvell's maintenance of an effective system of internal controls; and other risks detailed in Marvell's SEC filings from time to time. For other factors that could cause Marvell's results to vary from expectations, please see the risk factors identified in Marvell's Quarterly Report on Form 10-Q for the fiscal quarter ended July 29, 2017 as filed with the SEC on August 31, 2017, and other factors detailed from time to time in Marvell's filings with the SEC. Marvell undertakes no obligation to revise or update publicly any forward-looking statements.

Marvell ® and the Marvell logo are registered trademarks of Marvell and/or its affiliates. 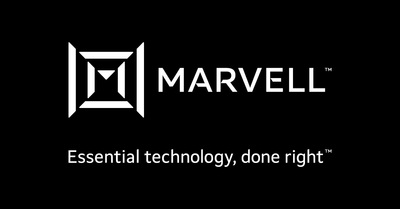